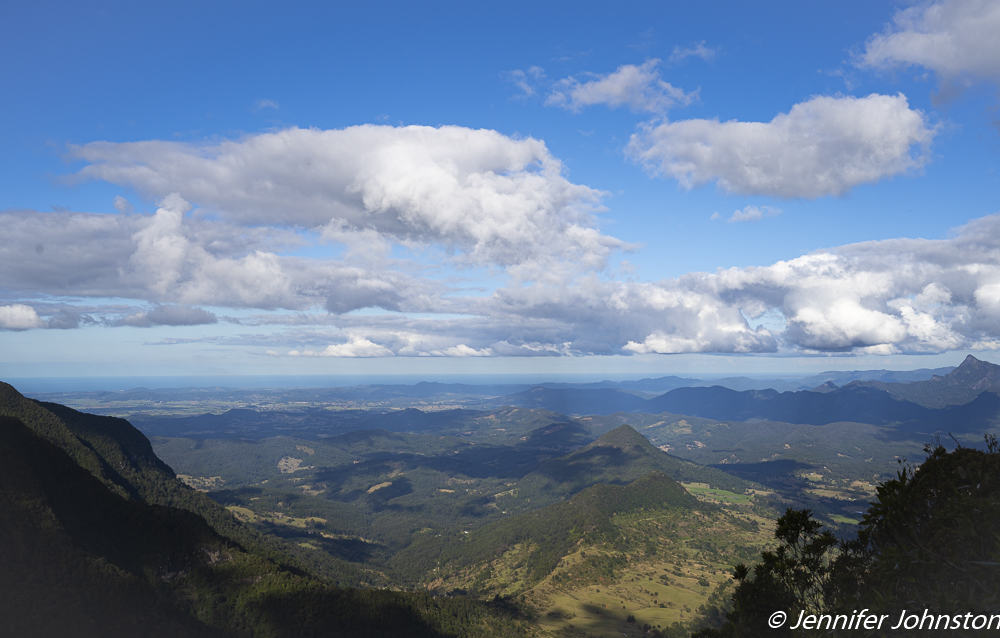 Jennifer Johnston has hiked various trails inside World Heritage-listed Lamington National Park, including traversing the famous Border Track a month before the destructive bushfires tore through the Binna Burra side of the Park in September 2019. Twelve months later, she returns to the Gondwana Rainforest to check in on her treasured paradise.

The essence of forest bathing

Clouds hang low in the mountains shrouding the jagged peaks of the Scenic Rim in a misty veil. Senses are stirred. Memories, too. Childhood memories.

My childhood was interspersed with long walks in nature. They may not actually have been far in distance, but on little legs and with a short (ish) attention span they felt long. I have memories of family adventures. My parents, the initiators, my two brothers and I the reluctant tag-along. Growing up in Brisbane, we explored trails on Mount Tamborine in the Gold Coast hinterland, wandered through Mary Cairncross Scenic Reserve near Maleny before looking out over the craggy peaks of the Glass House Mountains and took Sunday morning strolls through D’Aguilar National Park close to Brisbane.

As kids, we failed to appreciate the majesty of our surroundings. These outings were ‘just’ an adventure in the bush, usually associated with a fair amount of whinging.

“Do we have to go?”  But reluctantly we went, bribed with the promise of an ice-cream reward afterward (the simple pleasures.)

These walks, however, were transformative. As a kid, I didn’t know of shinrin-yoku. I doubt many in Australia at the time, child or adult, had ever heard of the concept.

“Listen to the birds singing and the breeze rustling in the leaves of the trees. Look at the different greens and the sunlight filtering through the branches. Smell the fragrance of the forest, breathe in the natural aromatherapy, and taste the freshness of the air as you take deep breaths. Place your hands on the trunk of a tree. Dip your fingers in a stream. Lie on the ground. Do all these things and you will feel a sense of joy and calm. This is your sixth sense – a state of mind.”

Excerpt from the book “Forest Bathing” by Dr Qing Li.

Dr Li, a 54-year-old physician and President of the Japanese Society of Forest Medicine, suggests by allowing nature to enter your senses – via your ears, nose, mouth, hands and feet – you unlock the power of the forest. The Japanese call it shinrin-yoku – shinrin means “forest” and yoku means “bath” – forest bathing. Li’s research indicates there are health benefits associated with shinrin-yoku, including reducing blood pressure, lowering stress levels, and boosting your immune system. I’m with Dr Li on this. I find forest bathing therapeutic, whether walking through a forest or bushland, it calms my mind and leaves me with a sense of contentment.

As a nine-year-old, while I never consciously thought about shinrin-yoku, I did practice my own form of it. During walks I would stop regularly, to stare upwards without stumbling. Through my young eyes, I thought those lanky straight tree trunks reaching skywards, their tips touching the blue expanse, were soldiers, standing guard. I always felt secure and safe in their presence. Many decades later, as I’m walking a forest trail inside Lamington National Park (no longer as a reluctant tag-along) I find myself stopping, shifting my gaze to the tops of these towering giants, seeking out those interconnecting leafy fans which mesmerised me as a child. Although my shoulders are now much higher from the ground, these ancient trees appear taller, growing as they clamour with their neighbours for rare pockets of sunlight.

I breathe in that familiar fragrant rainforest smell. That combination of damp soil mixed with vegetation and decaying timber triggers childhood memories of ambling along Lamington’s well-trodden paths. Not that nature aesthetics were of interest to me as a kid. My recollections of Lamington are of the dinner bell ringing at Binna Burra Lodge announcing mealtimes and the brightly coloured friendly birds flocking to the plates of bird food purchased at O’Reilly’s Rainforest Retreat.

In August last year, four weeks prior to the fires that would soon reduce the sections of the park to ashes, I returned to Lamington again, this time with a group on a two-night, three-day trip with walking adventure company, Life’s an Adventure. On the first night, after walking the Dave’s Circuit trail, we stayed at the historical Binna Burra Lodge, blissfully unaware we would never see the lodge again. On the second day, we walked the Border track to O’Reilly’s Rainforest Retreat. Of the park’s 150 kilometres of maintained trails, this 21.4-kilometre track dubbed the ‘backbone’ of Lamington’s walking system, travels up the McPherson Range crossing the New South Wales and Queensland border several times. It is one of the park’s oldest trails, following the original route made in 1863 by surveyors Francis Roberts from Queensland and Isaiah Rowland from New South Wales. Their job was to establish an ‘intercolonial’ boundary line for early settlers (landholders) to know which ‘colony’ they had to pay rent to for their pastoral leases. With an average completion time of around six – seven hours, our intention was to reach O’Reilly’s in time for sunset cocktails.

We entered the trail at the Binna Burra car park. At the 1.7-kilometre mark, we veered off to the Box Forest Circuit, then switched to the West Canungra Creek circuit. We walked through temperate rainforest, dappled sunlight breaking through the trees throwing golden highlights across the path, a mixture of rocks, tree roots and spongy soil. My eyes remain fixed downwards, focusing on the ground’s unevenness. Our first break of the morning comes on Mount Wanungara at the Wanungara Lookout, a sheltered spot chosen by our guide, Kate Jones, to hopefully avoid the windy gusts that are picking up on the more exposed western side. At an elevation of 1192 metres, while refueling the body we enjoy the view over the Limpinwood Valley below.

“You can see where we’ve walked,” Kate says, gesturing towards the Binna Burra Ridge.

With the higher altitude comes the cool temperate rainforest where the southern or Antarctic Beech trees (Nothofagus moorei) reside. These mystical giants with the shamrock green moss-coated limbs are the patriarchs of the rainforest and a present-day link with ancient Gondwana. They are estimated to be around 2000 – 5000 years old. The ground around the knobbly gnarled roots of one of these magnificent trees near the Wanungara Lookout is dusted with a layer of leaves. I peered into one of the darkened chasms caused by decay and wondered how many storms this ancient relic has weathered.

An hour later at just over halfway, we stopped for lunch on the highest peak in the park, Mount Bithongabel (1,195 metres) The clear day offered vistas overlooking the north eastern corner of New South Wales. In between overgrown trees, I glimpsed the patchwork of the Tweed River valley below and the misshapen tip of Mount Warning, the remnants of an ancient shield volcano that erupted repeatedly 20-23 million years ago. To the east were ocean glimpses and to the south, Byron Bay. Re-fuelled and wary of the hour and the ground to cover, we continued our gradual descent, before weary legs propelled me into O’Reilly’s in time for dinner, followed by a glass (or two) of red relaxing in front of the library’s fireplace.

In early-August 2020, the COVID travel restrictions have eased in Queensland, and I couldn’t wait to return to Lamington for some much-needed forest bathing. O’Reilly’s thankfully hadn’t been touched by the bushfires that struck Binna Burra. Over two days, my 21-year-old son, James and I explored a few trails, indulging in mother-son time.

We walked the Border Track to the Wanungara lookout – the trail (at the time of visiting) was closed on the Binna Burra side, still undergoing a clean-up by Parks and Wildlife. James strode ahead and I was doing ‘my thing,’ stopping regularly to look up and allow nature to permeate my senses. As a child, birdcalls were of no interest, but with ‘maturity’ I’ve become fascinated, loving nothing more than hearing the ear-piercing whipcrack of the iconic Eastern Whipbird, calling out to his female companion. Near the top of Mount Wanungara, I heard an unfamiliar bird call. I made a quick recording on my phone, intending to ask the guide who takes the morning bird tour at O’Reilly’s to identify its distinctive sound.

We stopped for lunch at the Wanungara lookout. The day was less windy than it was 12 months ago and the views towards the ocean were equally spectacular. A low-lying horizontal bank of clouds cast a crazy collage of shadows on the valley below. This section of the Border Track was opened up by Herb, Mick and Norb O’Reilly in 1912 and I wondered how different would their view have been to the one we’d looked out towards?

The following morning our guide on the bird walk was Mary O’Reilly, one of 10 children to Vince and Lona O’Reilly and a third generation of the mountain family. I asked her about the birdcall and held my phone up to her ear.

“That’s the Albert Lyrebird,” Mary said without hesitation. “It’s so clever it can mimic the call of other birds and has even been known to replicate the sound of a chain saw.”

I was chuffed to learn I’d heard the elusive Lyrebird’s call and told James about it later. He didn’t share the same excitement as his mother, but I know his day of birdcall appreciation will eventually come!