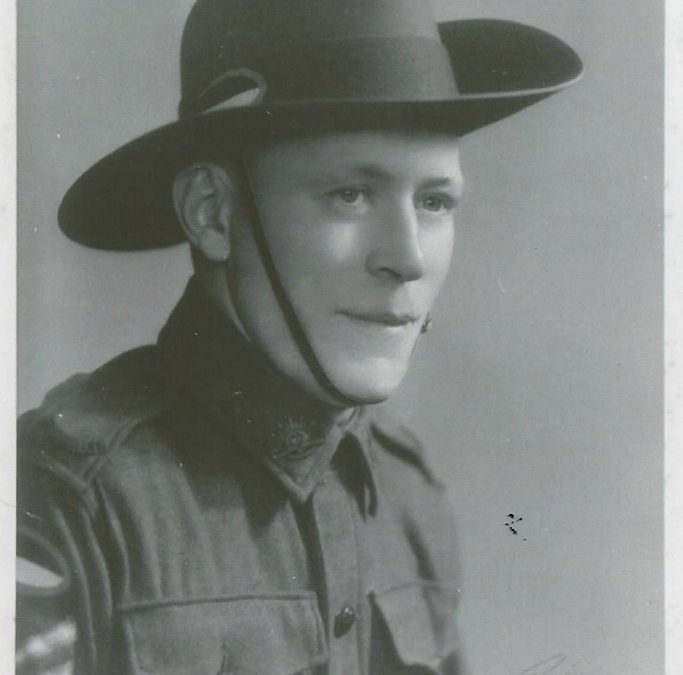 A war medal finds it way back to family

Digging in his Tarragindi side garden, Mat Schliebs discovered a piece of metal. “Initially I thought it was part of a child’s toy or a piece of scrap metal,” said Mat. “It was buried almost 30cm deep.” He showed it to the rest of the family. They cleaned the dirt off and to their surprise discovered it was actually a war medal. Engraved on the back was an inscription: DS Parkinson service number QX13579.

Mat’s 8yo son Flynn suggested they should try and find a family relative of DS Parkinson and return the medal to them. “My mum and I looked up DS Parkinson’s family tree and information about him on WWII, which said he was captured by the Japanese and he died in prison during the war,” says Flynn. “ We cleaned and polished the medal and we wanted to find who it belonged to.”

Flynn emailed Brisbane’s Courier Mail newspaper to ask if they could help find the family of this soldier. This story was published on Thursday 7th April calling for any family or relatives to come forward.

My mother phoned me on the afternoon of Thursday 7th April, to say she had a bit of news to share. A medal belonging to her Uncle Des had been found. Mum was excited and surprised. I couldn’t believe it either! She was having difficulty contacting the family, so I located the story on-line and contacted the journalist Trenton Akers who wrote the story for the Courier Mail. He co-ordinated contacting Megan Schliebs – Flynn’s mother. I let Megan know Des’ niece Nanette Johnston (my mother) – was still alive and co-incidentally lives in Tarragindi.

Desmond Stanley Parkinson was born on the 30th October 1910 in Woolloongabba (now Buranda) Brisbane. He was the youngest of four children, with one older sister Vera and two older brothers Frank and Arthur.

Des started primary school as a 6yo at the Dunellen Provisional School, which later became the Greenslopes State School.  In July 1925 Des attended the Church of England Grammar school (Churchie.) He represented Churchie in the A cricket team in 1927-28 and in rugby in 1927.

1927 – Churchie and the A Grade cricket team

Leaving school at the age of 18, Des worked for the Queensland Trustees, until he enlisted in the Australian army in July 1940.  Corporal Des Parkinson was sent to Singapore in August 1941. He was immediately promoted to Sergeant and sent to Malaya where troops trained to fight against the Japanese.  The family received correspondence from Des during his time serving in Singapore.

But the Australian and British forces surrendered to Japan on the 15th February 1942 and all Commonwealth soldiers became Prisoners of War. This is when the correspondence from Des became erratic.

My mother has actively researched the history of the event surrounding Sandakan and Des’ fate as a prisoner of war. Over the years she read many books and has been involved with the Sandakan memorial foundation. The following information about her Uncle Des is sourced from her research.

Many of the prisoners of War were sent to Changi prison in Singapore, but due to overcrowding in this prison, large numbers were sent to Sandakan. On 7 July 1942, “B” Force, including Des sailed from Singapore on the Japanese ship “Yubi Maru” for Sandakan, Borneo, arriving at Sandakan 11 days later. In total, 2,750 prisoners of war comprised of the Australian 8th Division and remnants of various British units were moved to Sandakan. By September 1944, the numbers had fallen to 1767 Australian and 641 British.

As far as we know, Des remained at Sandakan until he was sent on the 1st Death March to Ranau. By the end of 1944 when allied forces were within striking distance of Sandakan the Japanese command ordered the prisoners be removed inland to Ranau, (256 kilometres) west. These became known as the “infamous” Death Marches.  In January 1945, 470 prisoners guarded by 500 Japanese were forced to march through almost impenetrable jungle along narrow tracks of mud, through swamps and over treacherous mountains. Many of the prisoners were suffering from advanced stages of diseases and malnutrition but were still forced to march through miles of some of the most difficult country in Borneo, terminating at Ranau on the foot of Mt Kinabalu.

The second march comprising 532 prisoners left Sandakan on 29 May 1945. 183 arrived at Ranau on 26 June to find only eight survivors from the first march. Of the 288 prisoners left at Sandakan, none survived to the end of the war. The Japanese said no prisoners should live to testify what had gone on in the years they were prisoners of war.  Sadly despite receiving official news of surrender, the remaining 33 surviving prisoners at Ranau were killed by the Japanese.

In a book written by Lynette Silver (Sandakan – A Conspiracy of Silence, published 1998) it is recorded Des reached Ranau but died a few days later on the 19th February 1945. He was buried at Ranau 1A. The cause of death recorded was malaria / acute enteritis. Of the 1,800 Australians sent to Sandakan, only six survived – because they escaped. In total, 2,428 Australian and British prisoners of war died on the Sandakan to Ranau Death Marches during World War II.

The family is notified

Des’ surviving sister Vera (my grandmother) was notified of Des’ death in October, 1945 – eight months after his actual death. They then had the unenviable task of telling Des’ mother he’d died. At the end of the WWII Ettie Parkinson had prepared Des’ room, cleaned his shoes, anticipating his return. According to my mother, she was devastated about Des’ death and never recovered from the terrible news. Ettie died a few months later, on 12th February, 1946 (aged 73 and a half.) It was said she died of a broken heart, caused by the news of Des’ death.

1922 Desmond and his mother Ettie Parkinson

“I only knew Des for a few short years, as I was only nine years old when he left Australia, never to return, but I still have some vivid memories of him and happy times,” says Nanette. “He was my favourite Uncle, and he will remain in my memory forever.”

In 1951 the Australian Government posthumously awarded Des Parkinson four military medals. With the exception of the Australian War Medal, they were sent to the Queensland Trustees. The family has correspondence from the Central Army Records Office of this. From here there is no knowledge of where the medals were sent. Unfortunately due to a family rift which occurred when Des was serving his country overseas, there was no contact among Vera Lavis and her surviving older brothers Frank and Arthur Parkinson (who both went to war in WWI).  No one (on our side of the family) is really sure why the family divided but it was after their father, Frank Comer Parkinson died (13th April 1941.) My grandmother never cared to discuss the family division – asking her about it caused her grief.

My mother nor her brother Alan Lavis knows how Des’ Pacific Star medal ended up in the Tarragindi garden bed, until Liesl Harrold, filled in a vital missing piece. A third generation family historian with specialist skills in built heritage and statistical research, Liesl read the article in the Courier Mail and saw an opportunity to  test her genealogy skills to help in some way. “Having relatives of my own who served their country during the World Wars, I can appreciate how much a missing medal can mean to a family especially with ANZAC day being fairly close,” says Liesl.

Liesl’s research revealed the house once belonged to Errol Parkinson, the son of Arthur Harold Parkinson, one of Des’ older brothers. There is no information about how the medal came to be buried or whether there is only one.  Could there be more? Errol Parkinson passed away in 2010. It appears the Queensland Trustees may have passed the medal (s) to Arthur Parkinson and then to Errol. Without contact with any side of his family no one is sure.  But to be certain there are no further medals buried, we’re organising a metal detector to check the garden bed before it is filled in.

As a special tribute Megan Schliebs contacted Weller’s Hill Primary school’s principal John Webster to ask if the missing medal could be returned to my mother in their annual ANZAC ceremony. This took place in a moving ceremony on Friday April 22nd. My mother was presented with the medal by RAF Wing Commander Merilyn White with Ivy and Flynn from the Schliebs family.

Nanette Johnston and her brother Alan Lavis have never sighted any of Des’ war medals and are delighted one has been found. They’re grateful to the Schliebs family for retrieving such a treasure.  “To see and hold one of Uncle Des’ medals for the first time is very special,” said Nanette. “I’m very grateful to the Schliebs family and to the school for their involvement. This is a very special ANZAC ceremony.”  The generous way the Schliebs have handled this has touched all of our family – including my cousins and we can’t thank them enough for the special part they have played in this story.

The Schliebs family and mum

Des Parkinson is my great Uncle. His is one story among millions. On ANZAC Day we remember – those who have fallen and have given their lives in the various wars over the years. So many family members are affected by war and the impact of loss continues to be felt many generations later.