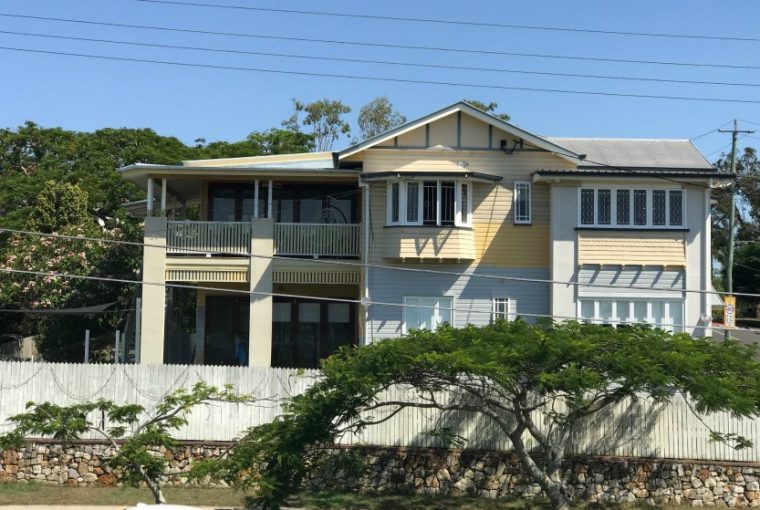 Love that the Crowded House song and thankfully I’m not dreaming, the (BIG) reno project is almost over! All that is left is the waft of paint fumes and clutter of painter’s trestles and paraphernalia as the painters finish the outside. A few walls are showing one of the fifty shades of grey I chose as my house colour! It won’t be long and I can remove the project manager hat. Hard to believe after 18 months the project is almost complete. I say almost as the external house paint is work in progress. The start date for that was delayed but I’ve learnt over the course of this project you just roll with delays.  Landscaping, some storage stuff to sort and the left over stainless steel security grills and old pool fencing lying around the spare block are still to be dealt with.  Next year (ha ha which is tomorrow!)

Oh and then there’s the spare block to develop. One of the major reasons I went down the renovation path on my old house, was to create a block of land to sell at a later stage.  There is still the registering of the title, the connection of utilities – including the big job of sewerage connections – and the clearing of “all encumbrances.” This involves removing the remaining slab and retaining walls!  A wee excavation project in a few year’s time, provided I can get the extension on the DA (development application) to allow me a bit of breathing space. 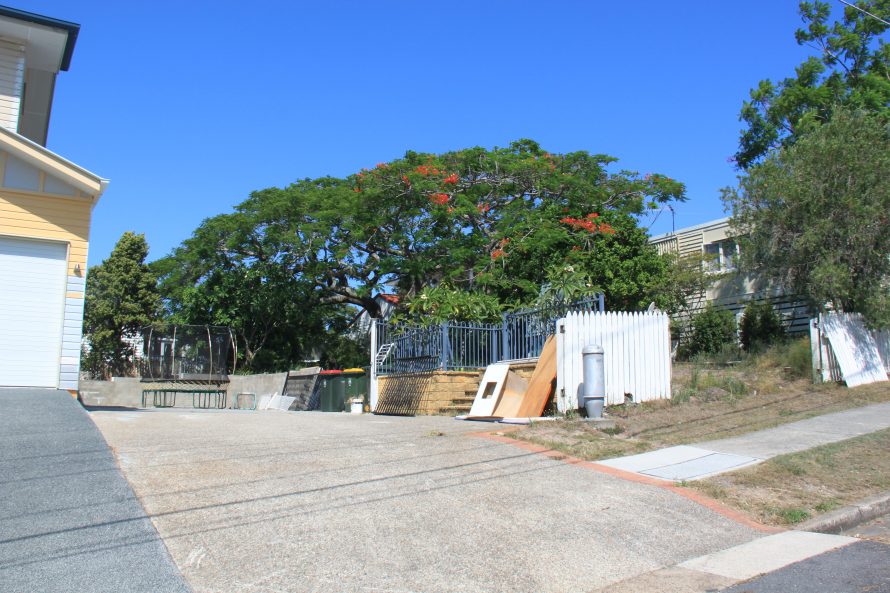 the spare block – the next project! 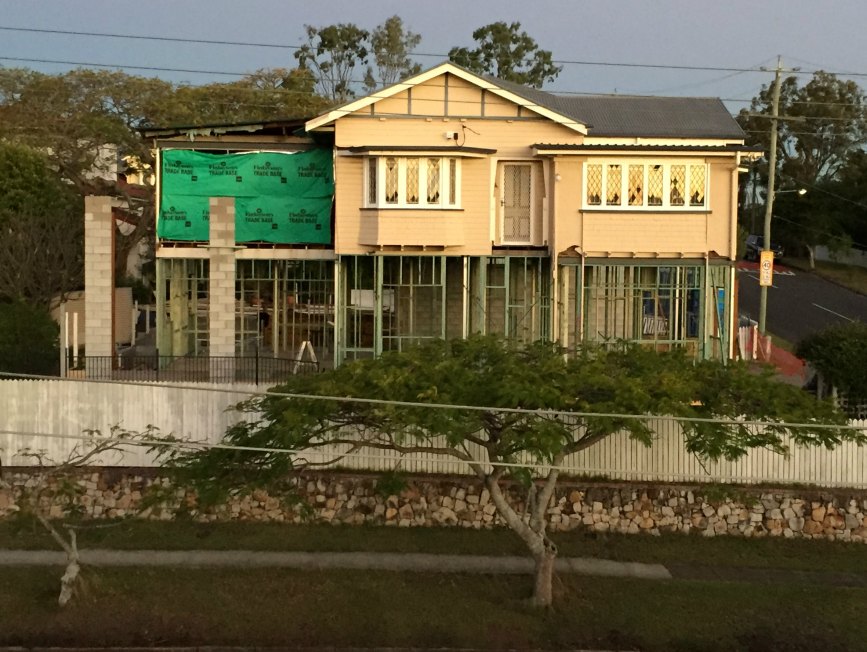 The downstairs areas became more than a skeleton. Walls and floorboards were added.  Decisions had to be made fast on the width of the downstairs bathroom and whether to add a bath or not. Thanks to a persistent friend (Kelie – yes you) the bath was ordered. Rather than going into the boy’s bathroom downstairs, the new free-standing bath was added to my en-suite.  There is hope I will have time to “enjoy” baths in the future. I’ve not been one for luxuriating in a bath tub unless it’s in a ****hotel room. It was fun testing baths for suitability. (If I was to be installing a bath it was going to be the right “fit!”)

Love my bath from Reece

After my fifth visit, Denise at Elite Bathrooms  worked out I’m hopeless at making decisions. My bathroom plans drawn by the architect were fairly basic. Without detailed drawings of elevations and accessory placement I had to decide where to place the fittings.  I visited a company whose job it is to design EXACTLY what is to be included in the bathroom including elevations. Your builder then follow those drawings – takes the guess work away from the client. Unfortunately, my budget didn’t allow for this service. In hindsight I wished I could afford it as it would reduce the stress. Issues invariably come up, like your tiler asking why there aren’t enough tiles to fully cover the wall?  Deciding where the toilet and mixers should go are critical as plumbing goes in before walls go up. Being a visual person, I struggled with these placement decisions. Looking at plans failed to tell me the story.  Thankfully my builder was cool with site visits, allowing me to double check on the trades. Renting down the road, made site visits a breeze!

A huge thanks to Denise at Elite. She was helpful (and patient) with each visit (and there were a few!) Together we came up with some awesome tile combinations and a few new layout ideas. Including adding tiles I fell in love with on my first visit to Elite. These became the feature tile in my ensuite. 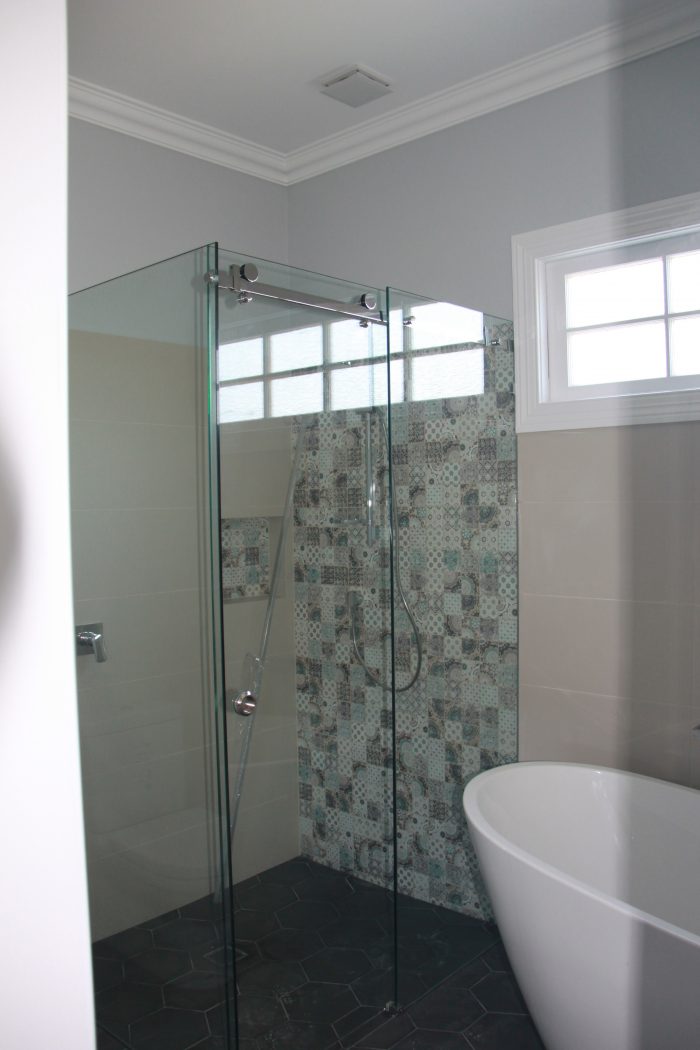 Surround yourself with good tradesmen

Not easy when you are at the mercy of your builder’s contractors! Tiles are a big investment and my German tiler Mike seemed ace at laying tiles. At times he came across a little serious (possibly the German side?) but he always managed to make a joke at the complicated tile patterns I chose. 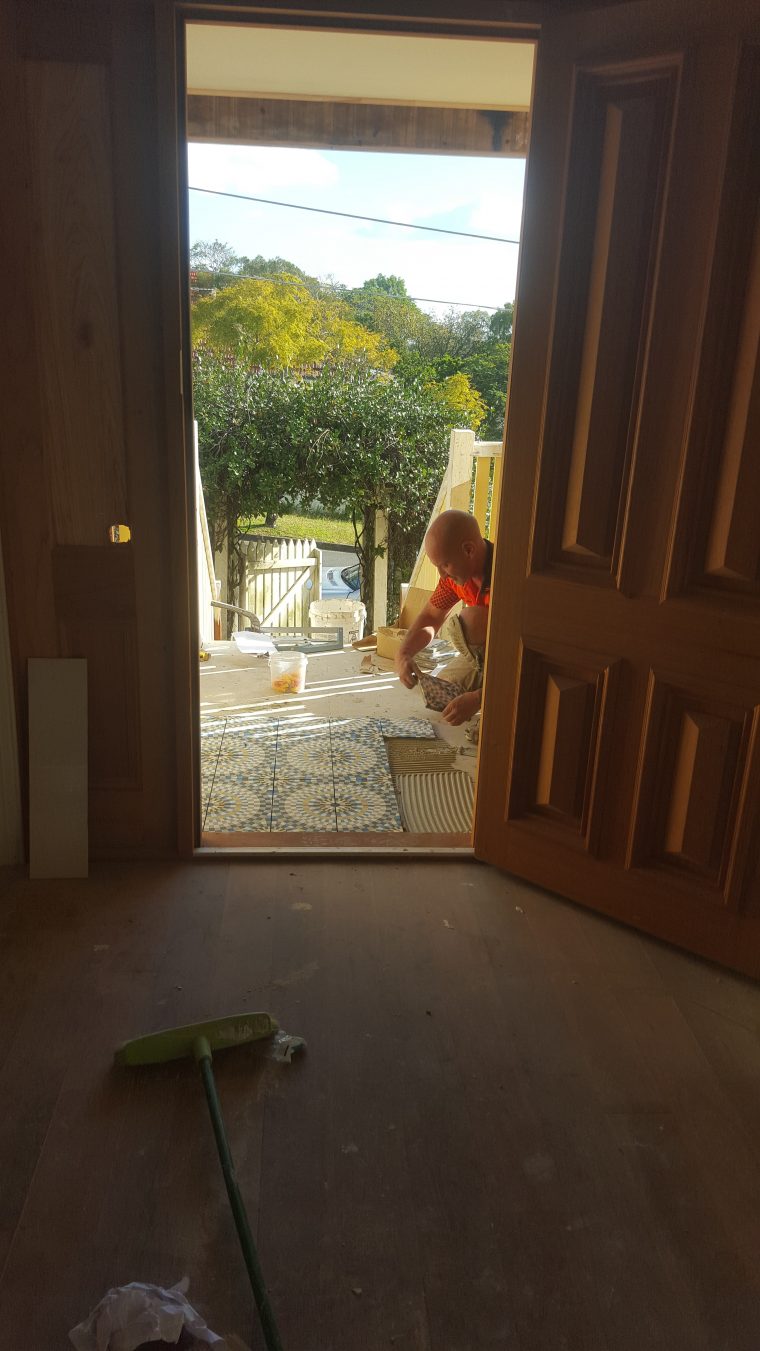 Mike at work on the front entrance

For example my front entrance. Inspired by some encaustic tiles I saw in the Saigon post office when travelling through Vietnam last year, my builder suggested Jatana Interiors for encaustic tiles. After contemplating the many range of (divine) on-line tiles samples for a few weeks, I managed to narrow them down to these fun, bright ones: French blue mosaic.

Your front entry area should make an impact and I feel these cheery encaustic tiles do that – thanks to Mike for suggesting a neutral trim to break the pattern. The end result is one of my favourite spaces in the house. Topped off by my dark blue front door (Resene paint – colour “regatta.”) I planned to re-cycle my old front door, but my builder suggested I put in a new one with side glass panels. I’m so glad I listened to him!  I’ve also found a leadlight craftsman who is working on a unique design for the side panels. 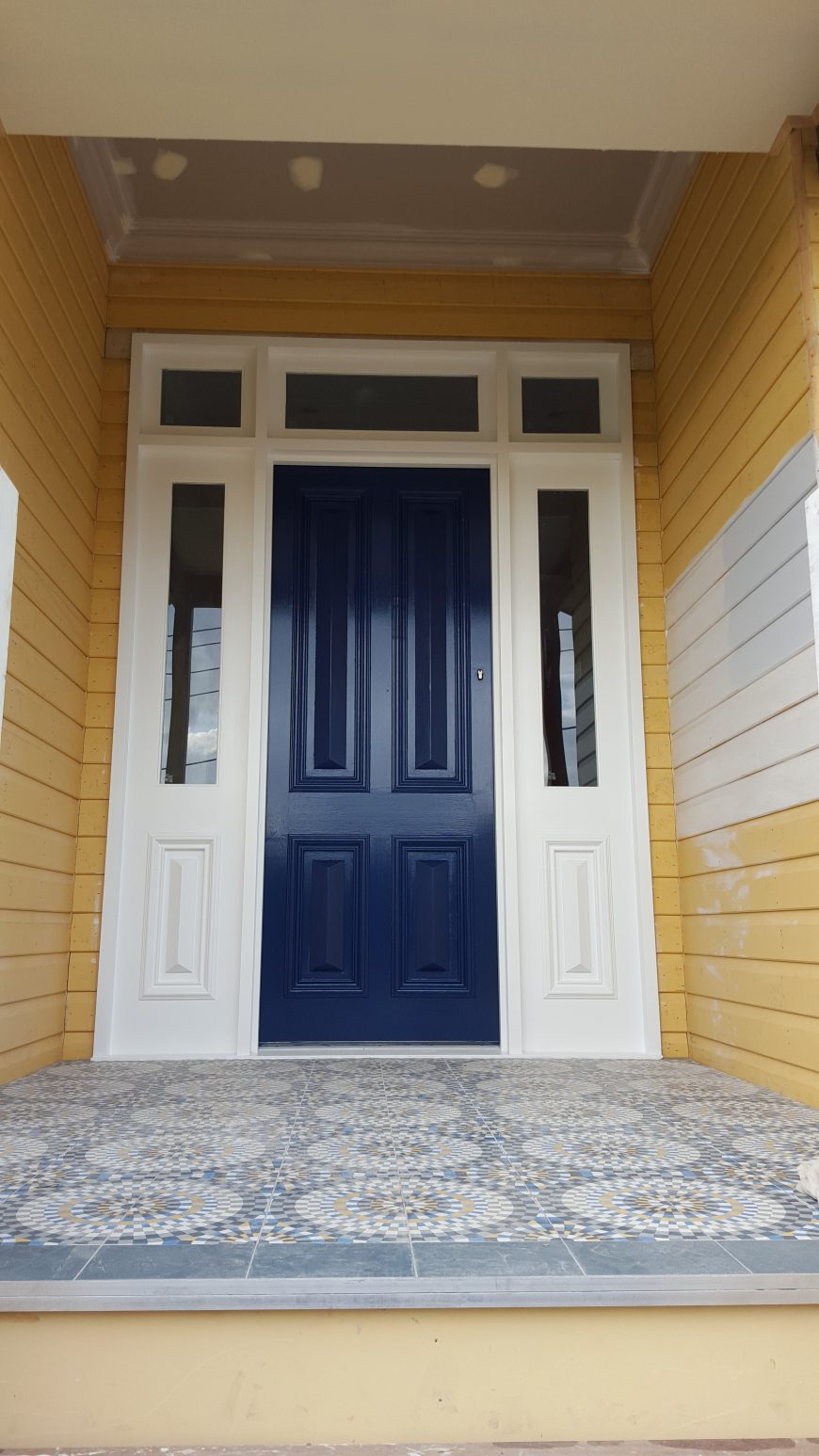 The pool fencing was a tough decision. But with the 11th hour change in my house design (previous post explains) and me inheriting a downstairs deck as a result of the timber framed floor (part of the re-design) I went for glass fencing.  Which looks great but is more expensive compared to the previous aluminium fencing. There is also the matter of keeping it clean – but that’s the problem with everything right? You have to use it and enjoy it – and look beyond the smudges.

The kitchen is the epi-centre of the house and with this in mind. I wanted to create a special but functional space. Key to this was engaging someone to help me manage this – Rachael Turner from Front Porch Properties.  This lady is a gem, using her feminine eye and attention to detail to create amazing spaces. My brief was to re-purpose some of my old brushbox bench tops, combine it with stone to make a textured finish. Rachael designed an incredible 3D version of my kitchen and with a few modifications we were both happy with the design. 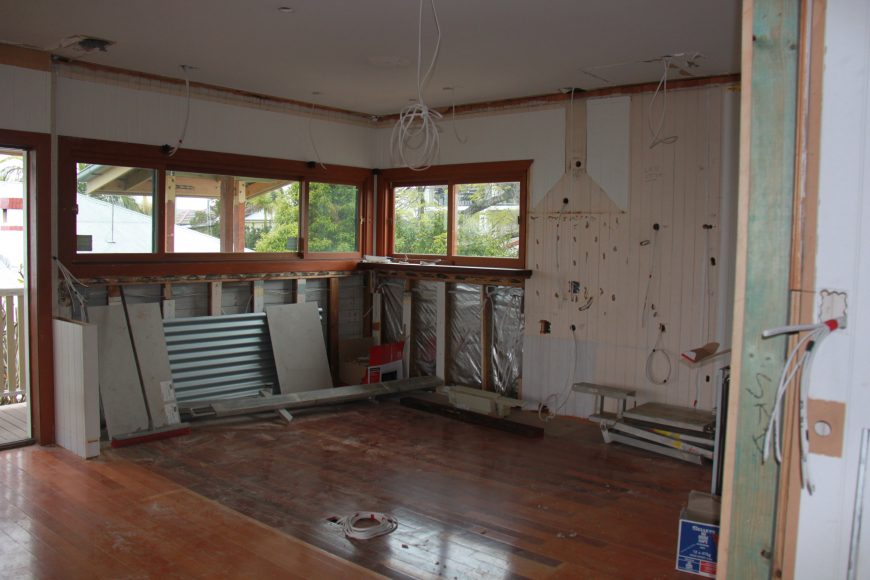 Before the kitchen instal 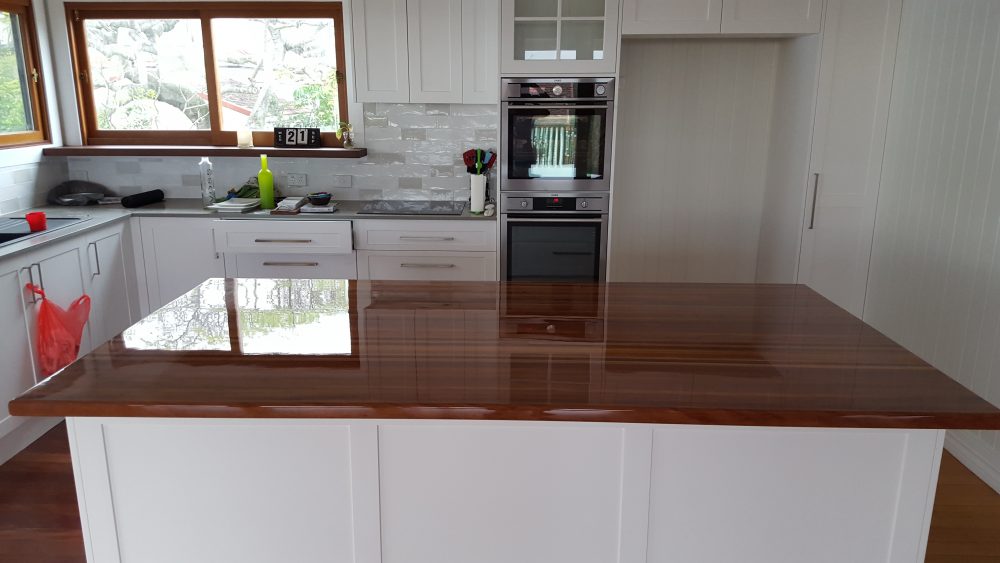 minus the fridge the finished kitchen

I sourced the tiles and lighting (under Rachael’s supervision) and she supplied the installers.  This was a great relationship and I enjoyed having someone to bounce a few ideas with. Rachael also helped with locating a supplier for the stone tops for my re-cycled bathroom vanities.  I’ve ended up with a fresh, modern, workable re-vamped kitchen including all the nifty features like soft-closing drawers and fancy pantry doors. My battered old fridge and dishwasher (with a new front cover) went back in. I can’t afford new ones until they are “kaput.” 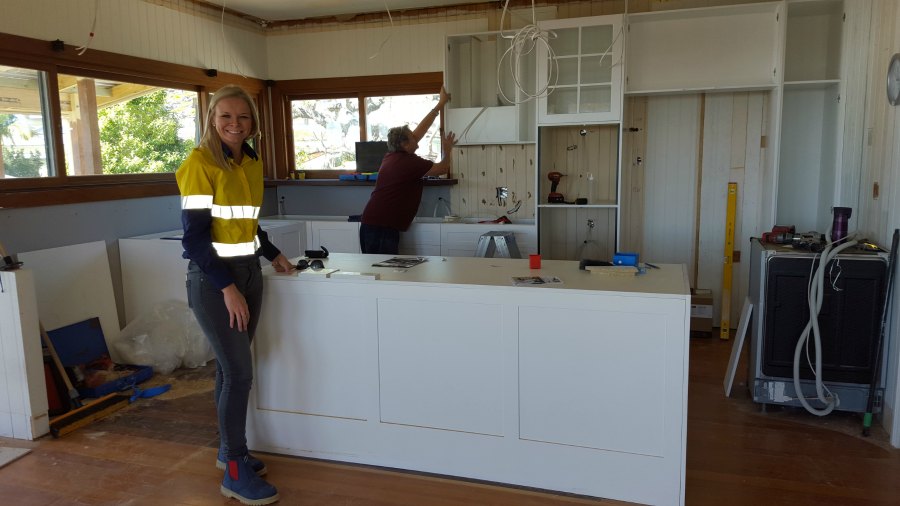 I could write a blog post just on the flooring saga – but won’t!  Short story is a supplier was recommended to me, once I received the quote I thought I was being “looked after” and had a great deal on ironbark flooring (rarer timber is meant to cost more.) I inspected a sample of the timber at the timber warehouse and was reassured I was going to get “like” timber.  When the builder’s lads came to lay the boards they discovered many boards were not “end matched” – an industry term for not being even on the ends – therefore difficult to lay. Yes there was much swearing by the lads as they attempted to cut and lay my timber flooring (additional time.) I was bearing the brunt of their unhappiness as it was my choice to source the timber this way – and I was the project manager!  After much discussion and phone calls, the floors eventually were finished with reassurance they would look GREAT once sanded.

The interior painters moved in and the big job of painting began using Resene paint.  I allowed my three lads to choose a feature wall colour for each of their rooms.  Looked great until we realised two room colours had been switched (despite all the information telling the painters the correct colour.) Thankfully it was an easy fix – as my sons didn’t mind the switcheroo.

The floor sanders were the last of the trades to move in and with great effort, they transformed my paint splattered and bare timbered floors to this incredible rich floor colouring! 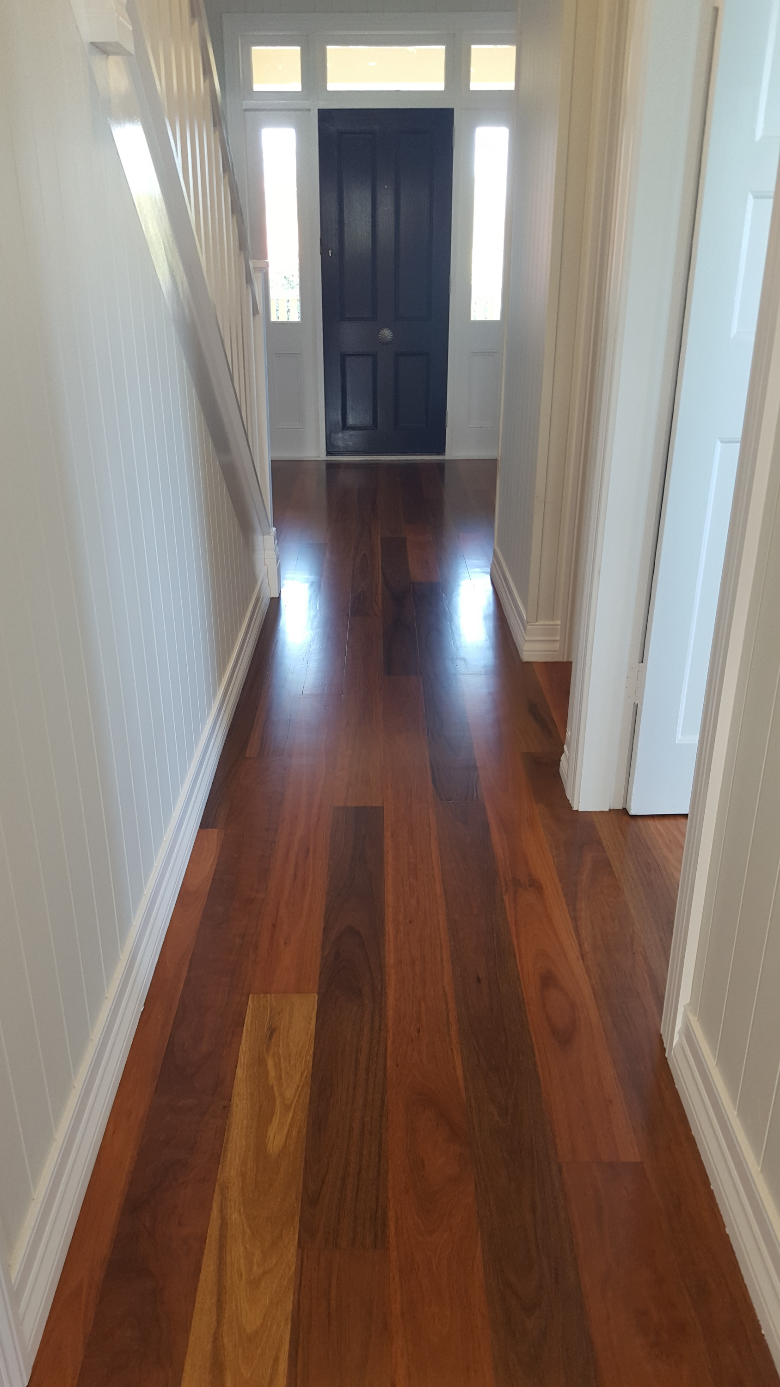 Love how the grey ironbark came up

The big move from the rental house back to my “renovated” home began in mid September.  It was only six months between moving houses. I don’t want to move again in a while!

A big job for this SWF

This project was single handedly managed by me – a single white female.  During the year, I wrote an article on women working in the male dominated building industry (collective-hub_women-in-construction.) Undertaking this project has enhanced my understanding of what women go through facing the “hidden” challenges some men present to women taking on tasks many deem only suitable for the male gender!  Occasionally throughout the project I would be asked to run certain decisions past my husband or partner.  Many assumed this project was not one a female would be doing on her own!

I’ve been very fortunate with the support of many throughout the project. One friend in particular who works in the commercial building industry was always available for any questions that cropped up over the course of the project.  He backed me 100% and always instilled in me a level of confidence at critical times when I was scratching my head in frustration asking “why?” His advice and support was invaluable.  My friends were also supportive – many in awe of my craziness to take on such a project on my own.

And my builder, who no doubt took a leap of faith taking on a building project for a naïve female, he came across as someone I could trust at the beginning and proved to be until the end.  There were a few issues along the way – what project wouldn’t have them? But we seemed to resolve them amicably. He received many emails from me, questioning sometimes even the most basic of tasks. It comes down to trust and your gut instinct , PLUS it never hurts to question something – especially when it’s your $$$ that are being dished out. My builder came highly recommended by someone I trust which worked for me in the long run.

Would I do it again?

Hmmmmmmmm on the last day of 2016 I would say “NO!”  There is still the spare block project that requires managing. It could be sold as a block of land or I could always develop the site and build a house on it. Best to never say “never.” 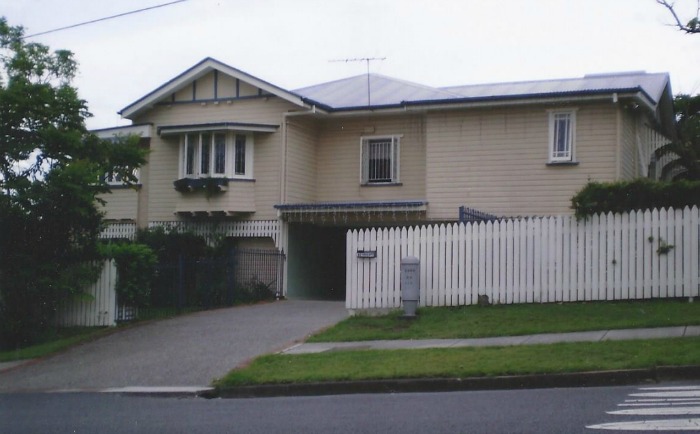 Before – side street view 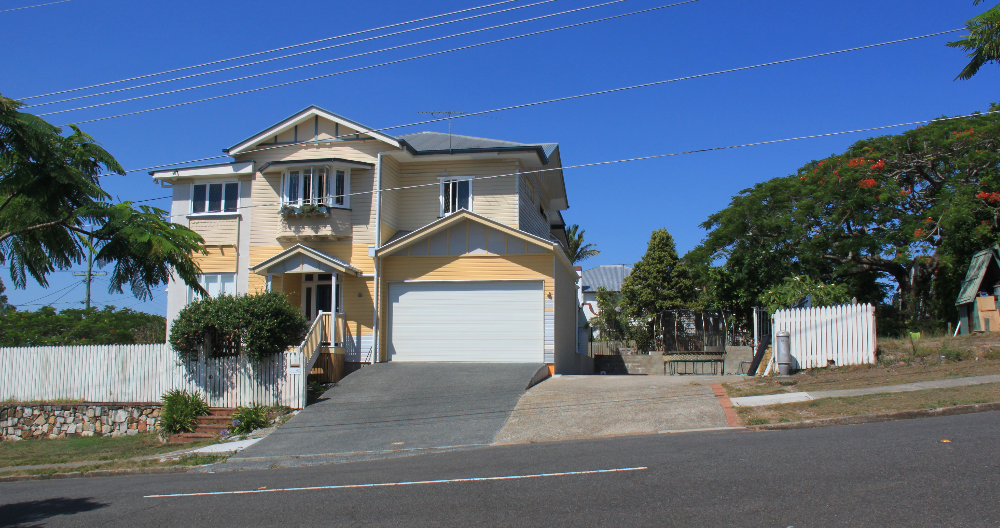 After – today’s look prior to painting