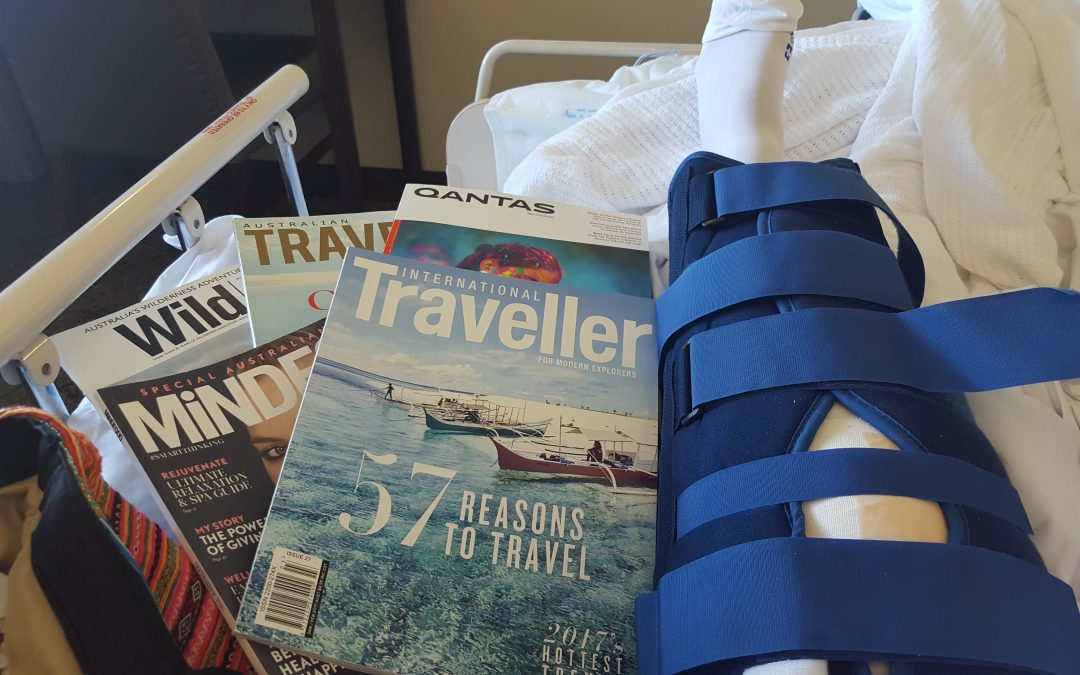 I had visions of 2017 being a year of many things.  Getting around on a pair of crutches with a broken leg was not part of my vision.

It all happened on day five of our Japan holiday. Myself with Mr 18 and Mr 13 were on a two-week vacation in Japan. (My other Mr 13 stayed home with Dad – “I don’t like skiing Mum.”) Like most trips, I’d done a fair amount of prior planning. This was my first visit to Japan and it was timed to co-incide to meet up with friends for a few days in Nozawa Onsen. Always more fun if you can ski with others – not just on the slopes but also the apres ski activities!  If you read my previous blog post on my impending Japan trip you’d know I was super excited to be finally visiting the land of the rising sun. It was going to be a quick overview: Tokyo, Nozawa Onsen and Kyoto were on the list.  As were a bunch of activities, including a sumo tournament, on the last night of the sumo season (had to jump through hoops to organise!)

But things don’t always go to plan do they? 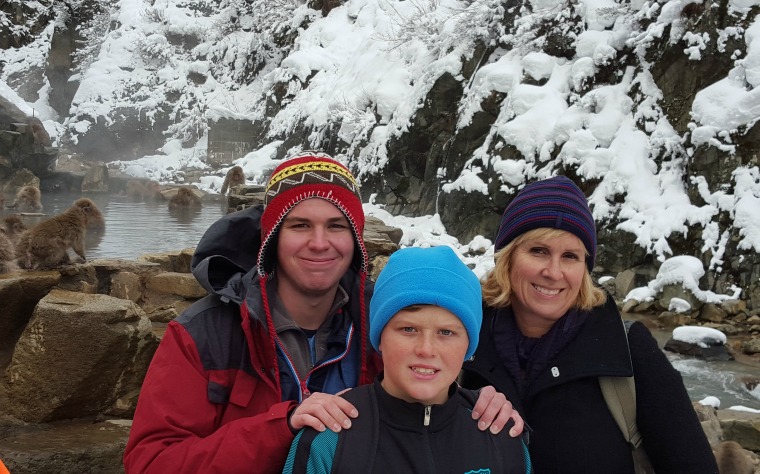 A visit to the snow monkeys

On this Monday morning, after dropping my lads off at the Hikage Nozawa Ski School for lessons, I approached the ski school to ask if could do a ski lesson at the same time. It couldn’t hurt to improve my ski technique and what was I going to do for the next two hours anyways? Ski on my own?  My friends left for Australia that morning and it was either go back to the village and chill on my own for the day, or ski?  The boys skipped their lesson two days earlier (yep we could not find the ski school on time!) So I drew on my best persuasive skills to talk the ski school into allowing me to do a make-up lesson for the ones the lads had missed. The ski school agreed, provided I paid some additional yen, I could have a private lesson (they’d received a last minute cancellation.) Ripper, I thought. I quickly told my lads on the way out I’d meet them back at the ski school at the end of their lesson.

I met my ski instructor Douggie, who hailed from Northern England.  A young guy working in Japan for the ski season, we chatted in the gondola on the way up. He was trying to establish what kind of skier I was. I told Douggie, I’m a cautious skier.  With one bad knee (result of an ACL reconstruction 25 years ago) I like taking it easy when skiing. Boring it may be, but I’ve accepted my conservative approach allows me to indulge in my love of skiing!

We skied a green run a few times with Douggie showing me a few tips to improve my archaic style!  He suggested we try a red run.

Green runs are my comfort zone, but when Douggie suggested a red, I thought hey, I’m with an instructor, what could go wrong?

We were about to head into the trail called the “challenge” (I know ironic right?!) Snow was falling, visibility was poor, it was difficult to see what lay ahead (my glasses underneath my goggles were fogging up!) But I recognised Douggie in the distance, waiting for me.  I took off  but wasn’t able to pull up next to Douggie, instead I skied past him building up speed. Feeling a little uncomfortable as my pace increased, before I could figure out where to head, I hit a bank of deep powder. My skis stopped dead but my body kept going!  Locked into those restrictive ski boots, something had to give. It was my knee which twisted awkwardly as I fell. I heard a sickening “crack” sound.

That ain’t good I thought. 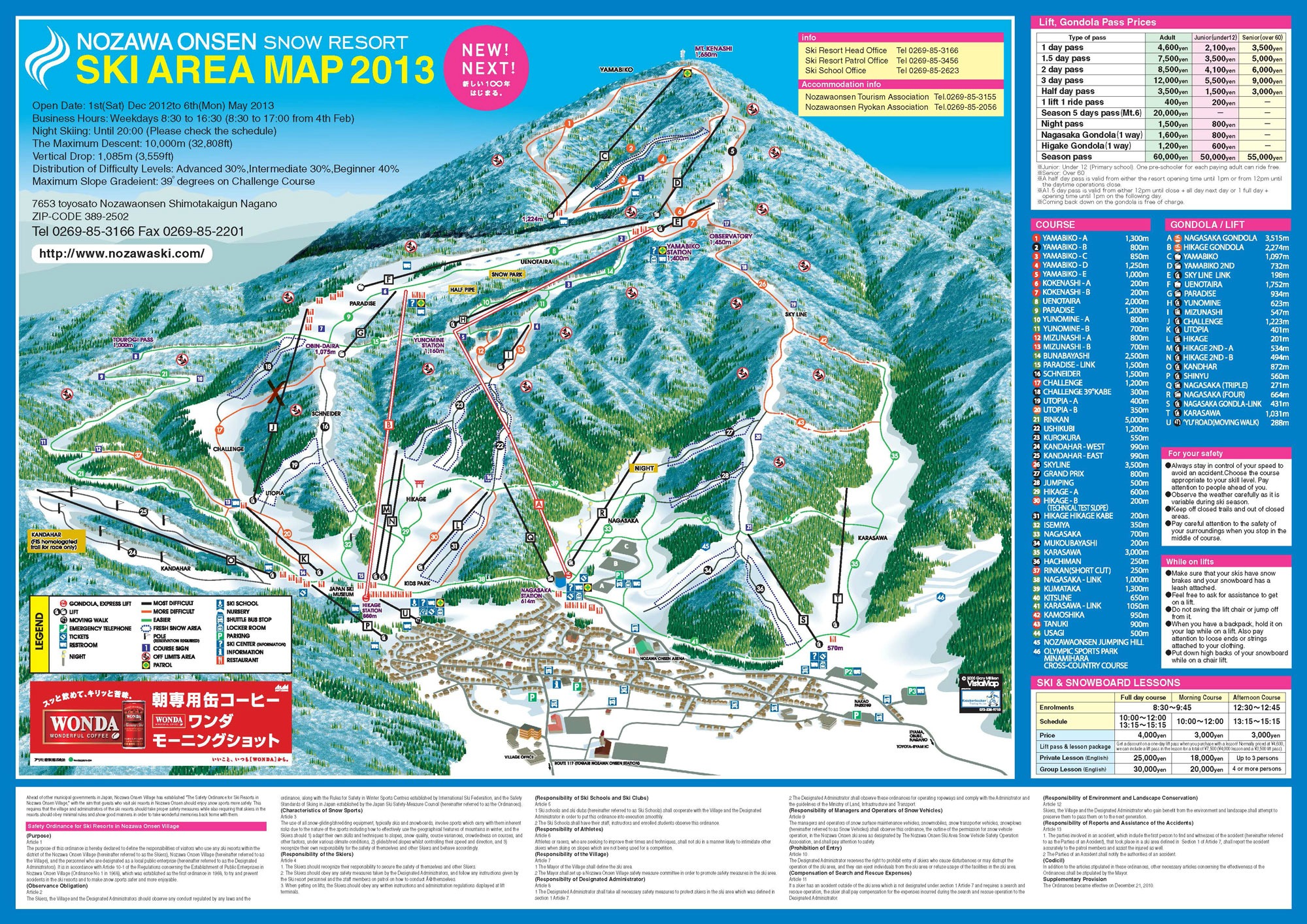 “X” marks the fateful spot! Trail 17 on the left of the mountain.

Douggie skied over and asked, if I was ok.

“I’m not sure,” I responded. “Just give me a moment.”  (Maybe a little time would allow me to recover?!)

We removed my skis and Douggie grabbed my hands helping me to stand. As soon as weight hit my left leg, I screamed out in pain (swearing like a trooper!)

There is more to my story, but I will leave that instalment for another article. Suffice to say, an x-ray at the local village clinic revealed I’d fractured the top of my tibia bone (technically: a tibea plateau fracture.) My leg was encased in plaster from ankle to the top of my thigh and I had to organise to return home to Australia for urgent surgery. My world temporarily un-hinged and my journey for the next four days in Japan, was not the journey I had imagined or planned for. 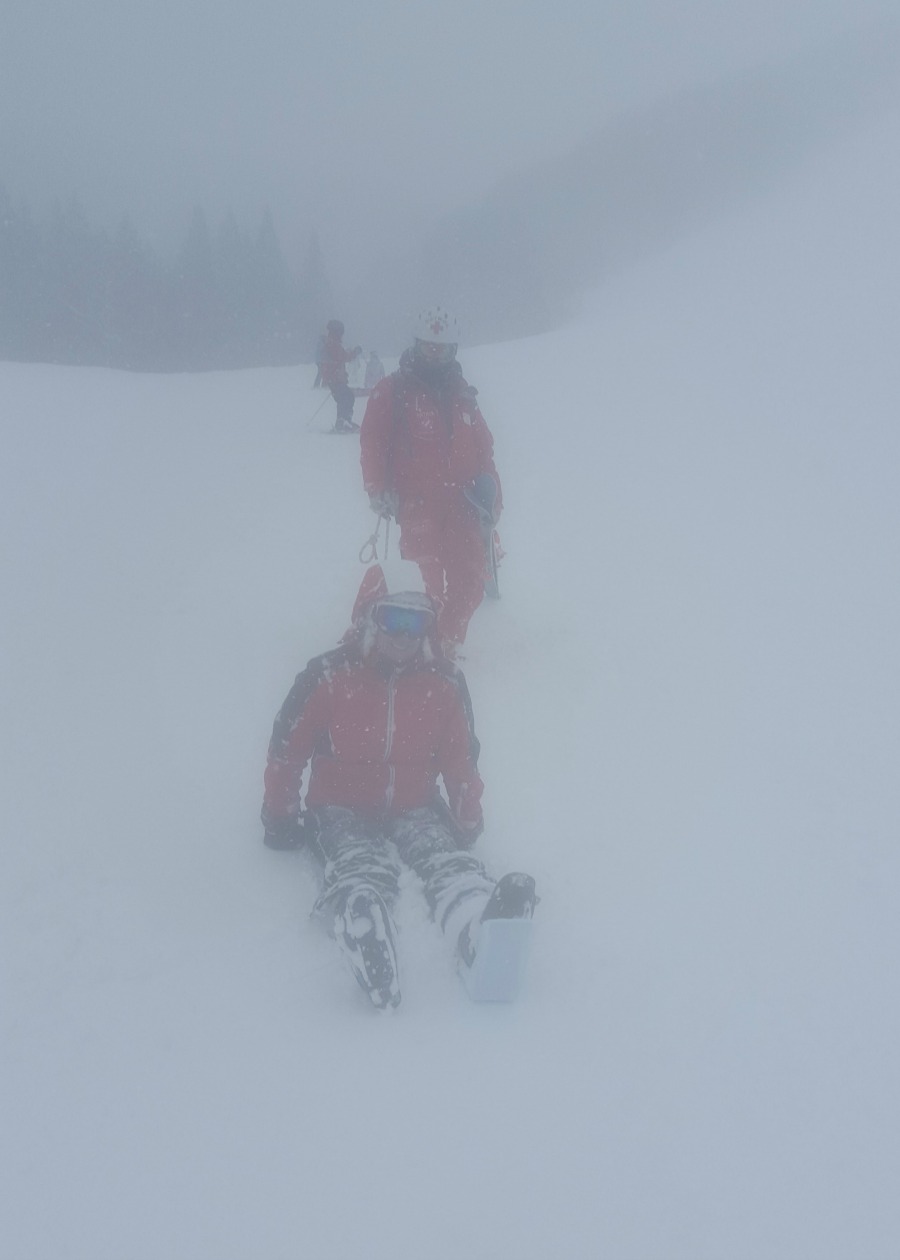 Jenn and my ski patrol rescuer, who has lassoed around the waist as I slide towards the skiddoo. (How bad is that visibility?)

I saw emptiness and tragedy

My friends tell me my ski accident was the universe telling me I had to slow my life down. But did slowing down have to involve hobbling on crutches for six long (no load bearing) weeks and quite possibly another six weeks?  Universe, could there have been another (less painful) way to receive your message?

As my good friend Julie said – things happen for a reason.  Now is the ideal time to tackle those writing projects put on the back burner in 2016, due to a time consuming project called “house renovation!” Maybe slowing down will allow me to indulge in one of my favourite past-times I’ve never had enough time to do: reading.

I look back and I still feel the pain

It’s been nine weeks since the accident (8 weeks post op).  With all that extra metal in my knee helping the fracture to my tibia plateau repair and the resulting pain and swelling that brings, I’ve had to slow down. My newly renovated home is my haven. A pair of Canadian crutches have become my constant companion (thanks Harry for the loan!) But using them to hop up 18 STEEP steps to the first floor, with one leg suspended has been challenging (Doctor’s orders: do NOT place any weight on that leg for six weeks!) I was grateful each time I made it to the top step without an epic fall.

One good thing though, being my left leg – I could drive once I had clearance from my doctor. So (thankfully) from week three I’ve been venturing downstairs and into my car to escape my four walls!

I know I’ll be stronger and I’ll be fine

Google searching the injury (tibia plateau fracture) has lead me to many interesting videos. They’ve helped me understand the repairs to my leg. (My surgeon isn’t a great talker, doesn’t say much when faced with my list of questions!) I came across Mumma Bat, who had the same injury last year. (She also is a Queenslander – yay!)  I love her video which explains many aspects of my injury, including how scarily similar our leg scars are! (And we both have the same internal repair machinery: a plate and six screws!)

Curious to know how long I’m facing recovery wise, I’ve reached out to Mumma Bat via social media to ask about her recovery. “From about 9 months post op onwards, nothing has really stopped me, I started going to the gym 5 days a week, and the only thing I struggle with is jogging/running on the treadmill, which I think is because of the impact running does to your knee. But I can walk, hike and climb now, 18 months post op. So I would say even as an older person by two years MAX you should be back to normal,” says Mumma Bat.

Two years I should be back to walking, hiking and climbing!???  Two years, seriously Mumma Bat, I can’t wait that long! I want to get to Scotland. I’m swapping my skis for hiking boots and there’s some trails in Scotland I can’t wait to discover. I don’t have 18 months to wait, the travel bug is stirring within!

For the rest of my days

Despite my frustrations and impatience at times, the injury has taught me gratitude. Friends and family have dropped in cooked meals, helped with grocery shopping, kept me company by stopping in and saying hi, or taking me to lunch/dinner. My friends on social media have continued with messages of support.  My boys have helped their incapacitated Mum carry things, emptying bins and hanging the washing out.  My ex-husband has been incredibly supportive. And the kindness of strangers has also been a wonderful surprise.

I have become more aware of the challenges facing those who are either wheelchair bound or who have mobility challenges. I’d never considered slopes or stairs were confronting pre-crutches!

So many others are going through much worse.  Accidents happen and I know I will heal – eventually! I just have travel slowly while it does.